What is a sutler? Ever heard of the word before? From the Oxford English Dictionary, it means "a person who followed an army and sold provisions to the soldiers." At many American Revolution reenactment events, besides being exposed to army camp life and battle reenactments, you will find merchants selling their merchandise. Some cater to reenactors and others such as Ron Mehalko founder of Revolution Wear focus mostly to spectators. 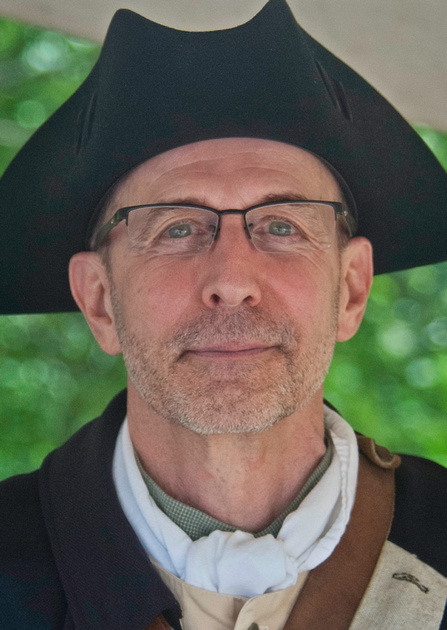 I've known Ron since I started photographing American Revolution reenactments. I believe we met at a Battle of Monmouth event? He was setting up his table early in the morning. I introduced myself and mentioned being a photographer. Since then at different events I would always visit & say hello.

Ron's  spot at the recent Battle of Monmouth reenactment!

I asked Ron to be interviewed a few months ago. He graciously agreed. To fully appreciate the reenactment experience spectators should wander around the merchant's tables. You'll always discover interesting items/souvenirs.

1) How long have you been a sutler (merchant) at American Revolution events?

I actually started out selling wholesale to Revolutionary Historic Sites and then pursed the idea of also selling retail at reenactments? Attended my first reenactment in the spring of 2002. It was a tough start but was able to convince those in charge and other participants that what I wanted to do was a good fit.

2) How did you create Revolution Wear and start your business?

I started thinking about the number of historic sites I visit and how disappointed I always was in what was offered for sale in the gift shops. I thought I could provide a better alternate and it seemed to work gauging from the feedback and reorders I received. 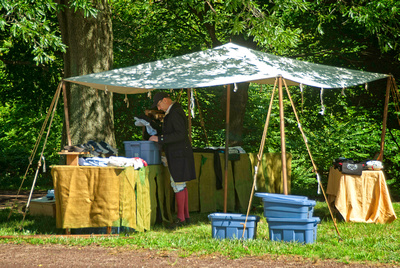 Setting up early in the morning!

3) Why did you focus on US colonial history?

My dad gave me a book on Thomas Jefferson and once finished my daughter and I took our first trip to Colonial Williamsburg. After that one visit we were hooked. The Revolution and 18th century culture have been a huge interest of mine ever since. All of this started me on the path to thinking about #2 which lead to #1.

4) How many events do you usually each year?

Typically about 6-8 events each year. 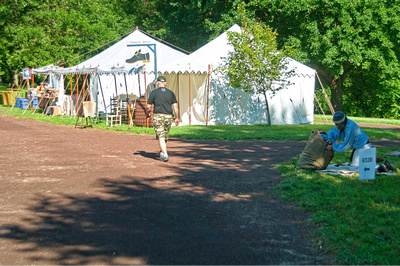 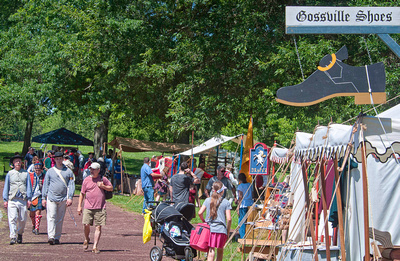 5) How do sutlers add to the reenactment experience?

It allows the public to see up close the type of clothing and accompaniments which the soldiers use day to day and for battle. There was always an 18th century solution to all the little problems just as today. I however focus on the history of the revolution using symbols and flags on my apparel as a reference point. I enjoy talking to the visitors about the symbols and how it had an impact on the soldiers and public.

6) Are spectators surprised that vendors particpate in reenactment events?

Not so much surprised but there is a general lack of knowledge of what a sutlers ‘job’ was and how they were a benefit to the soldiers. I often point to the Civil War (which most people seem to have a better grasp of) and how the photographers followed the army to provide a service and I will say we have the same function just different. 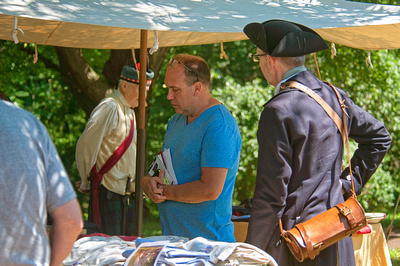 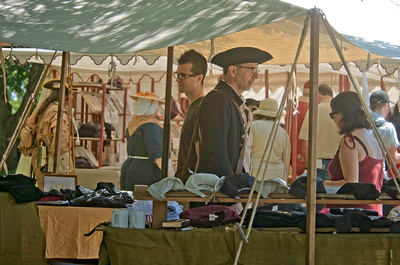 7) What items do you stock? Which ones sell the best?

My sutlery is very different than all the rest. I do not sell 18th century items which meant Revolution Wear was not readily accepted. But eventually it was which I think was due to everyone seeing that I sold quality merchandise very pertinent to the Revolution, the public was interested in what I sell and had to say and the openness and good will of the other sutlers.

8) Do you create your merchandise designs?

Yes, and no. I started out using flags from the Revolution as the basis of my designs on the hats. That evolved into using the same basic designs on tee shirts and polos. Having the tee shirts as a ‘pallet’ allowed me to expand to new printed designs but still all based on the American Revolution. I have always shied away from altering the symbols and having oversized multi-colored designs as many others offer.

9) How many of your customers ask you questions about the American Revolution? If yes, what was the most unique question you were asked?

I do get a number of questions, mostly about the symbols which are on the shirts and hats and I always take any opportunity to give an explanation and many times a bit of the back story of the who and why. Most times I have to stop myself from going on and on. To educate the public in any small way has always been a goal of mine and I enjoy it a little too much.

10) How do view the future of American Revolution reenacting?

I am concerned about the future of it all. I see the soldiers getting gray but do not see many younger recruits to take their place. It most likely is not as bad as I see it from standing under my fly as they march by but from what I have heard it is a concern in general.