The Revolutionary Germantown Festival held in early October to commemorate the reenactment of the Battle of Germantown on October 4, 1777. What’s fascinating is that the original house, Benjamin Chew House, a pivotal factor in the outcome of the battle still stands. Chew was head of the Pennsylvania Judiciary System under both Colony and Commonwealth, and Chief Justice of the Supreme Court of the Province of Pennsylvania. The house, built between 1763 and 1767, of ashlar gray stone, was a summer retreat for his family.

In the 10 plus years I’ve been attending this event one central figure was always prominent in my photos and that was Major Paul Loane of the Second Pennsylvania and 43rd Regiment of Foot. As Commander of the Crown Forces during this reenactment, he’s almost always standing in front of the house’s Iron Gate waiting for his troops to arrive and later leading them into up the steps into the house before the American siege. At another earlier event, I asked if I can interview him and he agreed. 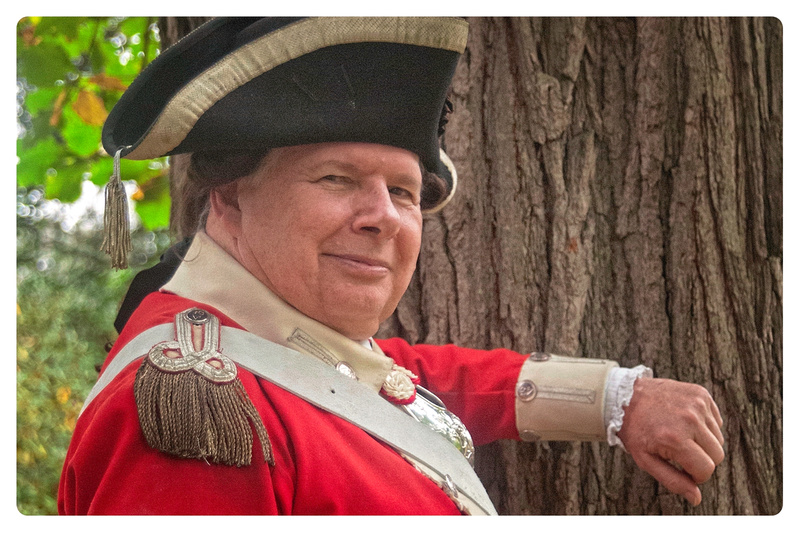 1) How long have you been reenacting?

I began reenacting in the summer of 1972.

2) How did you join the 43rd Regiment of Foot? Did you consider being a member of other units?

With the Bicentennial looming ahead, I had looked briefly at a couple other Philadelphia-area units but did not find any as appealing as the “Second Pennsylvania Regiment and 43rd Regiment of Foot.” I particularly liked the organization’s aim of accurately portraying both a Continental and a British regiment and its mission of supporting historic sites and educating the public. Of course, the unit also was poised to take a leading role in the upcoming Bicentennial and that was very attractive as well. But probably most of all, I liked the guys in the regiment. There were many historians and collectors among them (I’ve collected Civil War militaria since I was ten) and the camaraderie and exchange of information was great. I portrayed the unit’s Sergeant Major through the Bicentennial and it was great fun!

3) What are your roles as Major of the “Regiment”?

We are a non-profit, educational organization and operate with an elected board of officers and an executive board, so my duties as “president” are the same as any person who oversees a healthy and growing volunteer organization. I gather and disburse information to our membership. I make sure that all my dedicated colleagues, like my treasurer and quartermaster, have what they need to take care of their duties. I work with sponsors to gather support. I support our recruiting efforts. I try to provide new content for our website. I interact with historic sites and community leaders to develop the events they want. Sometimes I am able to create a new event for the reenacting community to enjoy. I also happen to portray the unit’s commander on the field, so I have to know the appropriate commands and maneuvers as well. 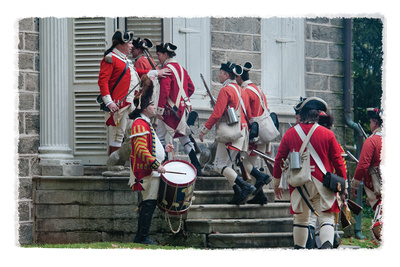 4) Do you ever portray an officer from the 2nd PA regiment? If not, why?

5) How many Rev War events do you attend yearly? Do you have a favorite one? Why?

Our unit usually has 18-20 events on our calendar. Sorry, but I have too many “favorites” to single out just one.

6) What is your greatest enjoyment from reenacting?

Having been a Rev. War reenactor for 45+ years, I’ve made a lot of friends among my peers and I always enjoy seeing them. I also love it when a complex battle scenario comes off just the way it was planned and all the participants have a positive experience and the public goes away in awe. But perhaps the most enjoyable part is just sitting around a campfire at night with friends, laughing and telling stories. 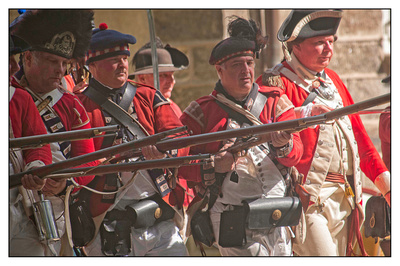 7) This can be an expensive hobby! What does the average Rev War kit cost? Can any of your equipment be written off taxes?

As an IRS recognized non-profit, just about every expense having to do with the regiment is tax deductible for most of us. Obtaining both the British and American kits, along with a musket, can cost upwards of $2000. However, we can loan new members just about everything they need so it all does not have to be purchased at once and they can turn out with us right away. Once you have all your gear the spending decreases dramatically.

8) What do you hope the spectators who attend will learn?

The humanity of the combatants of both sides. There is so much mis-information and myth connected with the soldiers of the American Revolution that almost everything we do surprises them. Yes, there were good reasons for the way they dressed, fought, and lived day-to-day. As we’ve seen, Living History is a unique, three-dimensional method of education and really can have an impact on people. It is a  wonderful thing to bring someone to the “Ah-Ha!” moment.

9) What’s your thoughts on the future of Rev War reenacting?

As schools now seem to downplay teaching History, the naysayers are pretty gloomy about attracting a new generation to reenacting. However, the internet and video games appear to be energizing that generation and creating a good curiosity about the past. I think that Rev. War reenacting, particularly along the Atlantic seaboard, will continue to have a bright future. 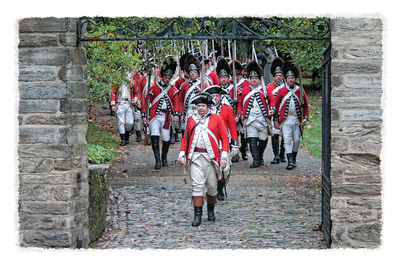 10) How do you learn more about colonial history?

Read. Research. Go to historic sites and ask questions. Thanks to the internet, when it comes to books, dissertations and access to 18th Century archives, this is a golden age.

11) What books do you recommend about the American Revolution?

Way too many to list, however I particularly liked A Revolutionary People at War by Charles Royster and The Spirit of ’76 by Commager and Morris. If you’re a reenactor, you must read Matt Spring’s With Zeal and With Bayonets Only and John Houlding’s Fit for Service. For those interested in campfollowers, Belonging to the Army by  Holly Mayer is excellent.

We reenactors get all kinds of questions from the public at events and there is one that is legendary: “Is that a REAL fire?” asked by someone observing us prepare a meal in camp over crackling, flaming logs. It seems so absurd that it has become sort of an inside joke among us. I was recently visiting Plimoth Plantation, the fabled recreated 17th Century town in Massachusetts, and was talking to an interpreter in the “long house” inside the attached Indian village. I noticed she was sitting in front of a small fire and so I asked if she, too, was ever questioned if that was a “real fire.” She laughed and said “yes, many times.” Some things are universal in the world of Living History. 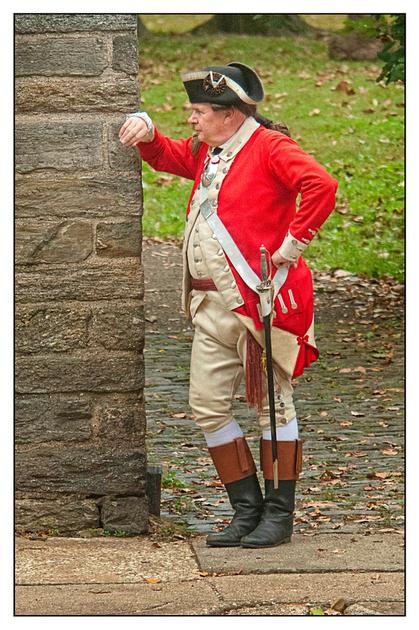