Living in the Philadelphia, PA suburbs, has many benefits. I'm close to many of the American Revolution reenactments held in this region. The Battle of Germantown now referred to as the Revolutionary Germantown Festival, I've attended thirteen years. It's one of my favorite events located in North Philadelphia and only about a 20-minute drive.

At this event, I always capture spectacular images. The  2010 event was special for me. I photographed from the 2nd floor in the mansion. What a unique photographic experience! 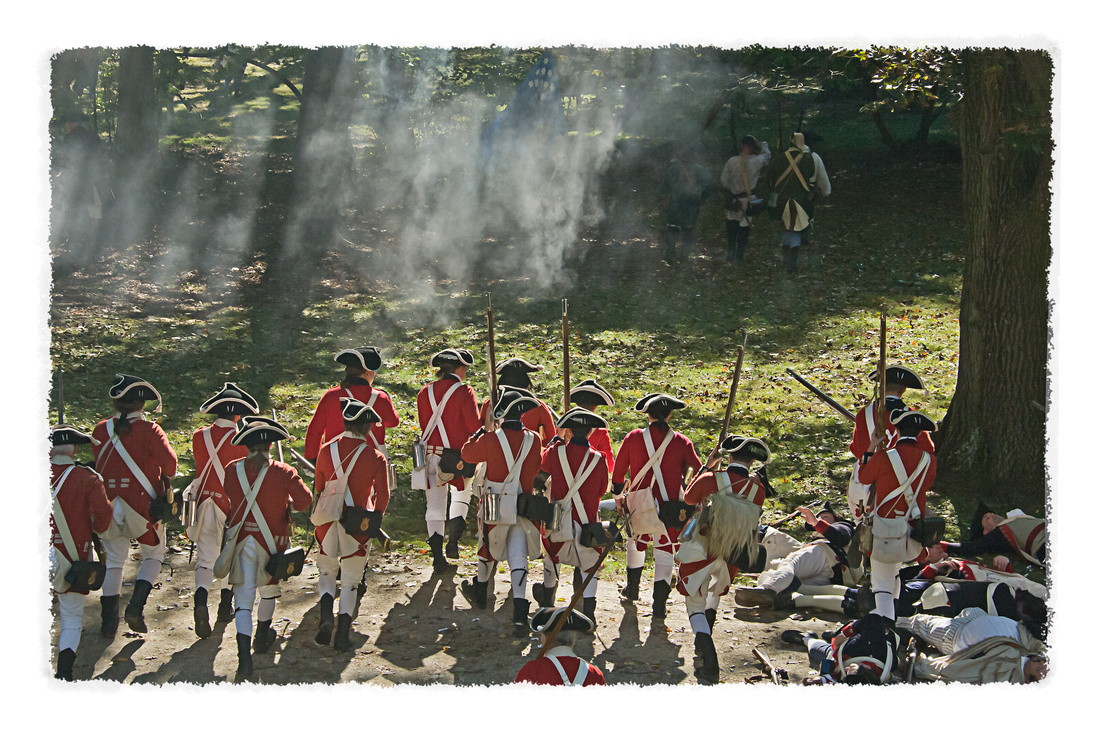 For this month's blog, I asked Jocelyn Rouse, Marketing & Development Coordinator at Cliveden (Chew House), to be interviewed. This historic site, located in the Germantown neighborhood of Philadelphia, PA, played a pivotal role in the American Revolution Battle of Germantown in 1777. The British 40th Foot, of about 120 men, barricaded the mansion. Washington's troops tried to penetrate it with no success. Thus, the American advance was halted. The battle was then lost. 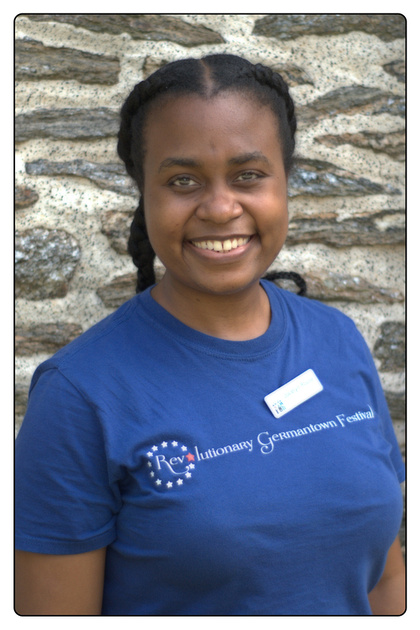 1) Are you from the Philadelphia area? What is your educational background?

I am from the Philadelphia area, and spent my formative years in West Philadelphia, Germantown, and Mt. Airy neighborhoods. I grew up and graduated from schools in the Philadelphia School District and I received my bachelor’s degree from Salisbury University in 2010.

2) What types of jobs have you had in your career?

Before I came to Cliveden, I was an administrative assistant and secretary at a charter school for six years.

3) What are your primary responsibilities as the Marketing & Business Operations Coordinator at Cliveden? Thought it was funny the young boy wearing a coonskin cap at this event!

4) What have you learned about the Chew family and mansion that you didn’t know before working at Cliveden?

Before I worked at Cliveden, I didn’t know anything about the site or that it even existed, so working here has been a very eye-opening experience. I’ve learned that enslavement was in the North, and that the Chew family were participants; that Benjamin Chew, Sr. (1722-1810) was inspired to build his own summer home after spending time at Mt. Airy, the summer home of his friend William Allen; Ada Knowlton Chew (1877-1948) was a WWI veteran and after serving in France was instrumental in creating the Women’s Overseas Service League which is still in existence today. The list goes on and on.

5) Has Cliveden’s mission changed with all the civil unrest and racial inequality incidents happening in the US now?

Our mission has not changed, but we are even more determined to share Cliveden’s complex history and work with other historical sites to tell more stories about people who are often left out as well as being a safe space for uncomfortable conversations.

6) If someone asks why visit Cliveden, what would you say?

I would say people should visit because there is more to the site than meets the eye. Yes, the buildings and the Main House are amazing and yes, we are a Revolutionary War site, but it is the stories of everyone who was at Cliveden over its three centuries of history that really make this place special and can establish a link between the past and the present. 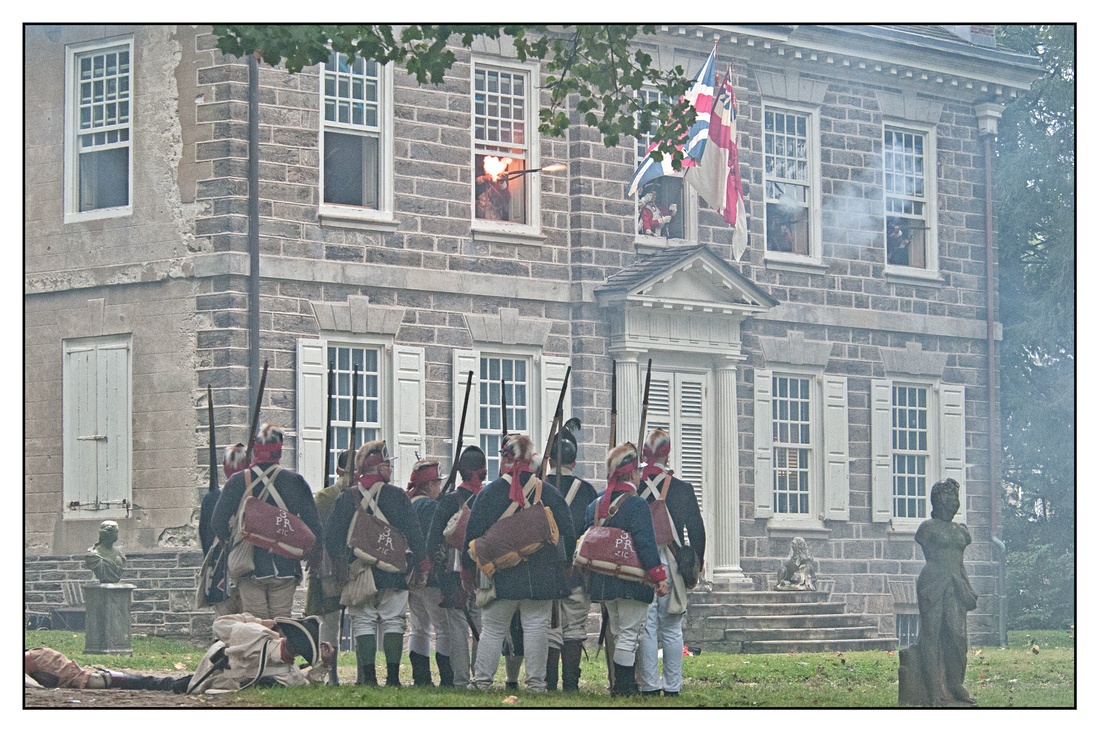 7) Amazingly, the house that was such an integral part of the Battle of Germantown is still standing. How was it able to survive all these years?

The Chew family was instrumental in preserving the house. The family members who come to mind in working to maintain Cliveden are Anne Sophia Penn Chew (1805-1892) who became Cliveden’s caretaker after the death of her father Benjamin Chew, Jr. in 1844; Samuel Chew III (1832-1887; we refer to him as ‘Centennial Sam’) who really established Cliveden as Revolutionary War site during the 1876 Centennial celebrations; Mary Johnson Brown Chew (1839-1927), Cliveden’s caretaker after Anne Sophia Penn Chew’s death and who also kept the property in the family in spite of the city and state governments seeking to have the family sell the property; Elizabeth Brown Chew (1863-1958) who maintained the property after her mother’s death and her brother Samuel Chew IV’s (1871-1919) death; and Samuel Chew V (1915-1989) who was Cliveden’s last owner. And of course, all those who worked and labored at Cliveden enabled it to be preserved as well.

Our staff has continued the family’s legacy as well. For example, we have Indow window inserts which protects the floors and collection from UV rays; we are in the process of having the chimney caps replaced, and our front gate on Germantown Avenue will undergo some restoration in the coming year.

8) How is the slavery issue addressed since the Chews at Cliveden held enslaved people?

We address it honestly and directly, and we make it clear that the Chew family’s wealth and status was based on enslaved laborers. In the Carriage House Visitor Center, we have our core exhibit Life, Liberty, and the Pursuit of Happiness, that juxtaposes the Declaration of Independence against the fact that the Chews had enslaved laborers and that the word life, liberty and the pursuit of happiness didn’t apply to all people. We are also constantly doing research in the Chew Family Papers, an archive housed at the Historical Society of Pennsylvania that has about 230,000 documents. This year, our Education Director looked through the Chew Family Papers for information about the enslaved laborers who worked on the Chew family’s properties in Maryland and Delaware, and in 2022 we are planning to share this research through public programs and a partnership with the African American Genealogical Society. 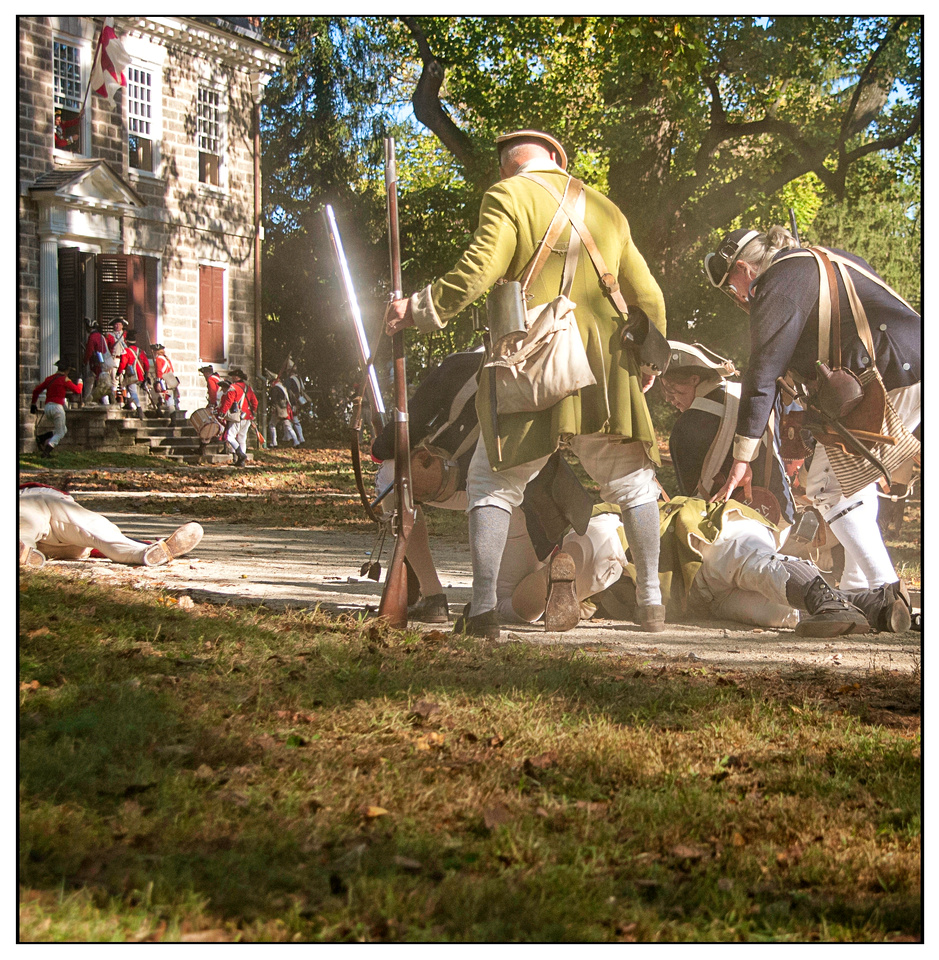 9) Because of this country’s gun violence epidemic, there have been discussions at Cliveden on whether to focus the annual Battle of Germantown on the reenactments or hold more of a festival event. Have any decisions been made?

As of now, we have an advisory task force that will help us plan programming around the Revolutionary Germantown Festival that includes more diverse stories of the American Revolution, and we will be working with our fellow Historic Germantown sites to have activities that highlight these stories during the festival.

10) Is there any question I should have asked?

I was thinking of something a little humorous and light-hearted; how about many cups of coffee do we drink in a year at the office?

Thank you for reading and Jocelyn for a wonderful interview. Blog # 43 will be posted in January 2022. Be safe & well!