About two months ago one of my reenactor friends suggested I select my top 10 photos for a blog post. The COVID 19 virus has canceled all upcoming American Revolution reenactment events for the foreseeable future. She asked: "Maybe you can do a compilation of your “greatest ” to entertain the “troops” until we get kicking again? Could make for an interesting blog!" I thought what a great idea!  In last month's blog, I selected & reviewed my #6-10 selections. Now I'll reveal my personal top 5 photos.

My goal at every  reenactment event is to capture unique images. The photo below is a good example. It was taken at the Battle of Trenton 2019 reenactment. This event is special because the reenactment occurs in the streets of Trenton, near the Trenton Barracks  and NJ State Capital. I'm so close I could touch the reenactors.

This event is difficult to photograph. To avoid modern elements I zoom in often with my telephoto lens very, very tight. I want no cars, telephone poles, or street signs, etc. in the photos. That's what I did here. I zoomed in close!

I had to move/jog with the reenactors as they fired in the streets. The photo shows the musket in Half-cock -the hammer with flint attached (called a dogs head) pulled back. Then a small amount of black powder is poured from the cartridge into the flash pan. I haven't seen another photo like this before. Yes! 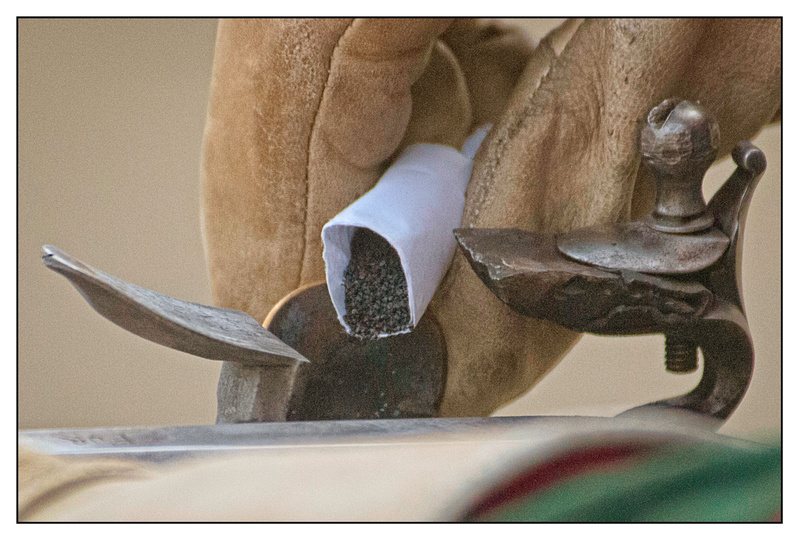 I've always been able to capture fabulous & interesting musket firing photos at every reenactment event. No two blast photos I've taken look the same. But, this one is far different than any other posted on my web site. This photo is from the Battle of Germantown 2019.  Magic happens when the flint strikes the black powder in the flash pan, an explosion. This flash was bigger than any other I've seen; it engulfs the entire photo. All the fire & smoke makes it an abstract photo. There is no clear subject. Your eyes wander aimlessly. Amazing! 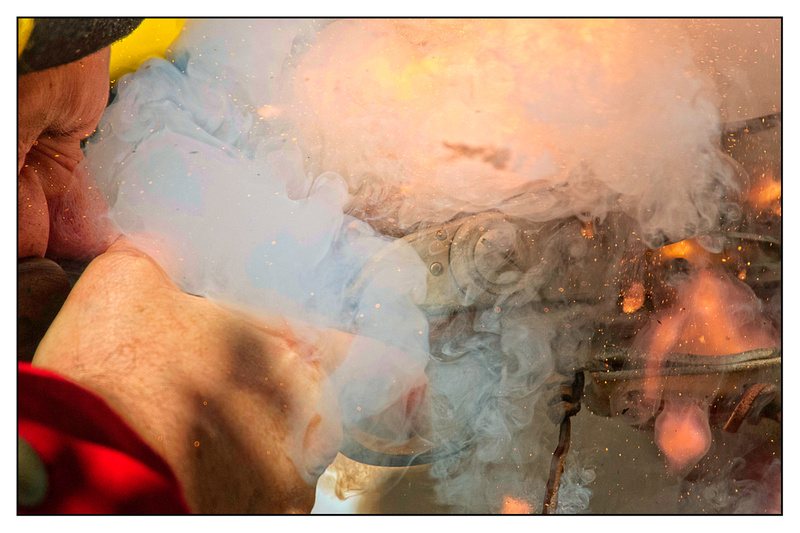 My advice when photographing special events is to take tons of photos. Sometimes you just get lucky. I did! That's what happened with this photo from the Battle of Stony Point 2019. It occurred in the morning when the Continental troops were assembling. To get the best images I'll photograph from all different angles and vantage points. Afterward, when reviewing hundreds of photos taken that day, I noticed this reenactor secretively extending his middle finger.

There is a saying, every picture tells a story. This photo has many possibilities. He isn't a real soldier so what could have happened that day that he needed to show his frustrations so dramatically? Plus, the day just started. We'll never know? But, that is why this is such a good photo. So many possible scenarios! 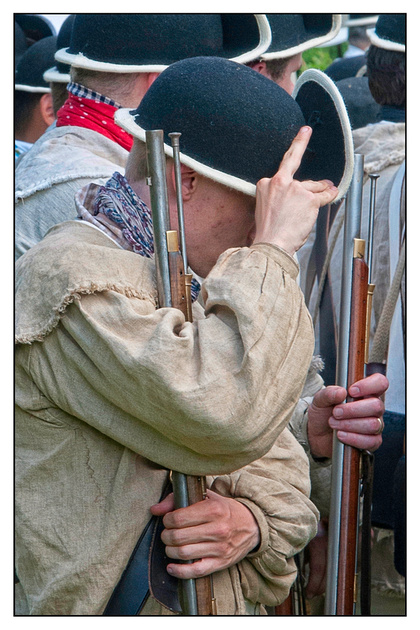 In rare occurrences, a photo expresses everything you're hoping to achieve. That is what happened in this photo from Washington's Crossing-Practice Event in 2019. Here's the background. It's December in PA with John Godzieba portraying George Washington looking through his spyglass. Looks great having the reflection of the NJ's Delaware River in the photo. He's preparing to cross the Delaware River that day. How perfect is that! I couldn't have scripted this photo any better if I tried. 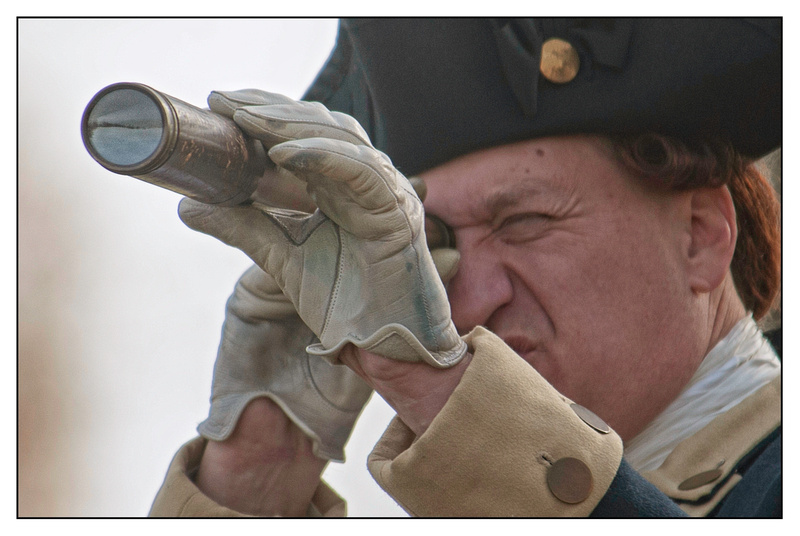 Here is my favorite photo. Probably always will be. Why? Because it's my first really good reenactment photo. It was taken at the Battle of Monmouth in 2009. For the first 2 years, I've posted numerous galleries with hundreds of photos. Some were good. But, this one was so much better. Taking this photo was not easy.

Most of the Monmouth battle reenactments held in June are incredibly hot with many spectators attending. It's important to secure a good location at least 1 hour before the battle starts. In 2009, the cannons were very far away. I knew photographing them would be difficult. My photography equipment was important in constructing this photo.

My Nikon DSR (interchangeable lens) camera has a smaller crop sensor compared to a full-frame sensor camera. Simply, this means the cropped sensor “sees” a narrower field of view. But, the good news is this smaller sensor magnifies my lenses by 1.5 times! Now my 80-400 lens becomes a 120-600mm. Also, to gain even more distance, I added a 1.4 converter which extends the lens even further. Now it's comparable to an 840mm. Why is this significant? The average eyes see around 50mm!

Now, I could photograph the cannons. After many tries I got it. For me, this photo will always be #1! 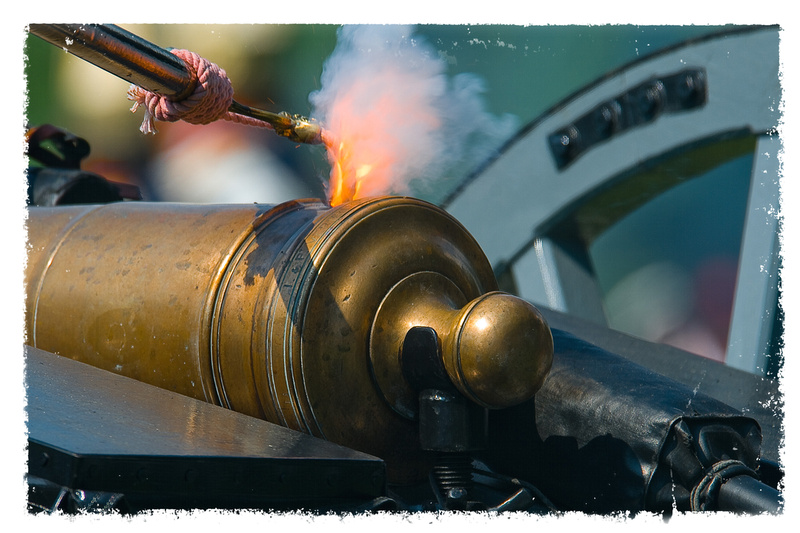 Did you agree with my top 10 list? Would you have chosen other photos? Please let me know.