Where do you go just to relax? Is it the beach, mountains or a big city? For me, it’s visiting Colonial Williamsburg!

As a young boy, many years ago, I remember my family visiting often during my summer breaks. It was a long trip driving (about 8 hours) from Long Island to Williamsburg, VA. On every visit, I would receive a new toy cannon to add to my extensive collection. For years, I always wanted a tricorne hat. Just like the one below. Eventually, when I was older it happened. I was thrilled! 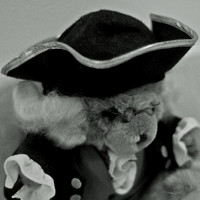 My parents always had reservations at the same hotel. Recently, my wife & son (3 1/2 years old) stayed there too. In the bathroom was a wall mounted bottle opener that I remembered from all my visits as a youngster. Old memories immediately came back! Now my goal is to visit Colonial Williamsburg yearly to create new special memories with my family. Soon my son will be asking for that tricorne hat!

How to describe Colonial Williamsburg? It is an over 300-acre living history museum that includes 88 original 18th-century structures. For 80 years from 1699 to 1779, Williamsburg was the capital of VA, the largest colony in America at that time. In 1780 the capital moved to Richmond. The town, except for the College of William & Mary, was virtually forgotten. Then in the late 1920’s the Reverend Dr. W.A.R. Goodwin rector of Williamsburg’s Bruton Parish Church convinced John D. Rockefeller Jr., the wealthy son of Standard Oil fortune to restore the historic town to its 18th-century appearance. A fantastic book that shows this remarkable transformation is Williamsburg Before & After by George Humphrey Yetter colonialwilliamsburg.com/Williamsburg-Before-and-After

My ideal day is to arrive in town just before sunrise. I bring a large cup of coffee and my SLR camera attached with the all-purpose 24-85 mm lens. Most mornings I’ll usually observe W&M students jogging, retired folks walking their dogs, and/or maintenance crews in their pick-up trucks cleaning the area. Between the Wren Building and the Capitol, a short distance of less than a mile, I get to stroll around the town where so many of our Founding Fathers developed their political ideas. It’s amazing that Washington, Jefferson, Madison, Henry, etc. walked these same streets. Even Benjamin Franklin visited here as postmaster twice in 1756 & 1763. It’s not difficult capturing great photos in such a wonderful place. A photo below of the Governor's Palace.

One early morning, I was walking near the capital and notice a ladder on the side of one of the buildings. See below.  I looked closer and immediately knew it would make a great photo. What do you see? To me, the ladder looked like a person’s mouth, the windows a pair of eyes, and the roof shingles hair. One of my favorites. Makes me smile. 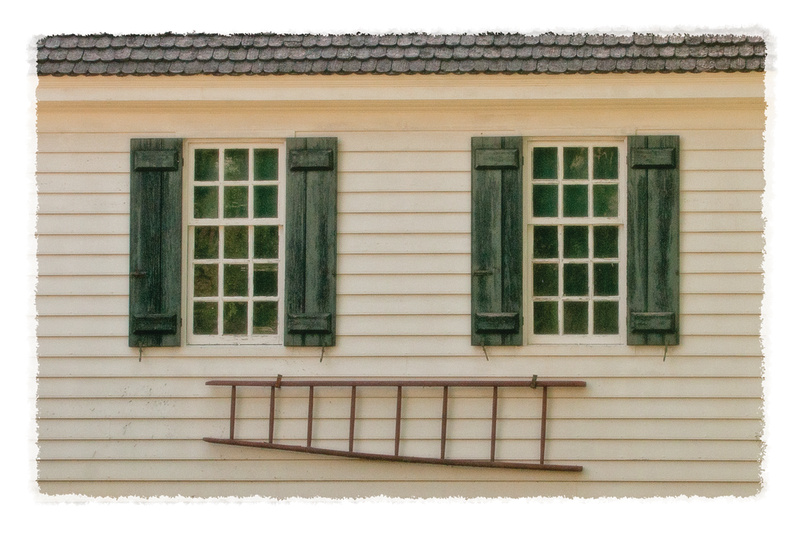 Over the years special reenactment events occur. When it’s held in June, unfortunately not recently, Under the Redcoat depicts the British occupation (for about 10 days) of Williamsburg in 1781. Below are some photos from this program. 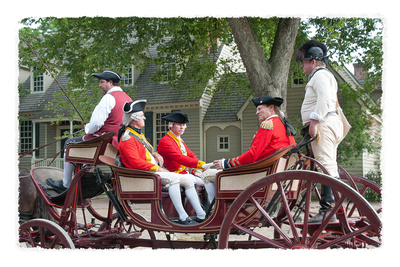 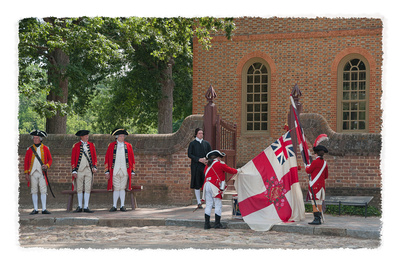 Another wonderful event that I hope occurs again soon is Prelude to Victory. This event celebrates the anniversary of George Washington & the French General  Jean-Baptiste Donatien de Vimeur, comte de Rochambeau and their armies stopped in Williamsburg for a few days rest before proceeding on to Yorktown for the last major battle of the war. I had the opportunity to speak with Marquis de Lafayette portrayed by historical interpreter Mark Schneider. Of course, he was in character. He has also interpreted "Bloody Ban" Banastre Tarleton. You never know who you might meet when you visit. Click here for more information about Colonial Williamsburg www.colonialwilliamsburg.com 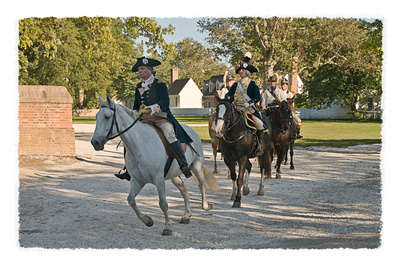 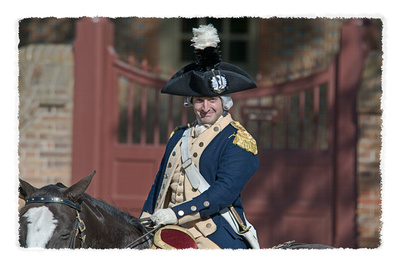 Later next month I have family members visiting from abroad. Of course, we will be traveling to Williamsburg for a long weekend. Luckily, the drive won't be as long, about 5 hours, since I now live in the Philly suburbs.