Thank you for your patience while we retrieve your images.

Home»NEW BOOK: The Voice, the Revolution, and the Key 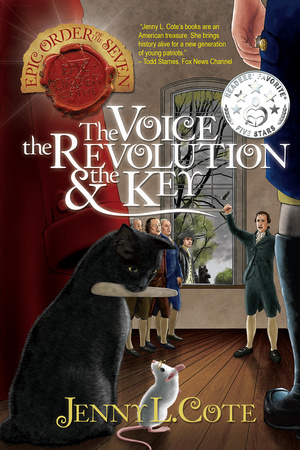 he Order of the Seven must help birth one nation under God by entering the lives of a unique generation of children chosen to become the Founding Fathers of the United States of America. Liz is given the assignment of helping Patrick Henry become the Voice of the Revolution, setting the entire war in motion. If Max can't protect George Washington in the French and Indian War, the patriots will lose the Sword of the Revolution to lead them. Nigel must ensure that Benjamin Franklin's kite-flying efforts succeed to turn the key to unlock American Independence, and Al must gather intelligence right under the nose of King George III. Victory will be impossible without powerful ally France joining the fight, led by its patriotic son, the Marquis de Lafayette. But will Kate be able to protect the young Marquis? The fight for liberty will be costly, with an Enemy determined to give the patriots the other outcome—death.

Covering events from the year 1743 up through the eve of the Revolution in March 1775, The Voice, the Revolution, and the Key is book one of a Revolutionary trilogy, followed by The Declaration, the Marquis, and the Spy and The Sword, the Thunder, and the Jewel. (605 pages) Learn more at www.epicorderoftheseven.com.
© American Revolution Photos
Powered by ZENFOLIO User Agreement
Cancel
Continue